Not every software geek blog starts with a post about a war. A war which is bad enough to potentially become a world-ending nuclear world war. I am honored by this.

Ukraine, my fatherland, is under an unprovoked and aggressive full-scale military invasion from Russia and its satellite Belarus. You should know this by now, dear reader. But Ukraine fights. Fights with passion. Fights in yet-unseen unity. Fights with support of almost the whole world.

Here’s a lady from Ukrainian territorial defence force in Kyiv, carrying an AK-74 assault rifle and leading an underage girl towards a railway station. 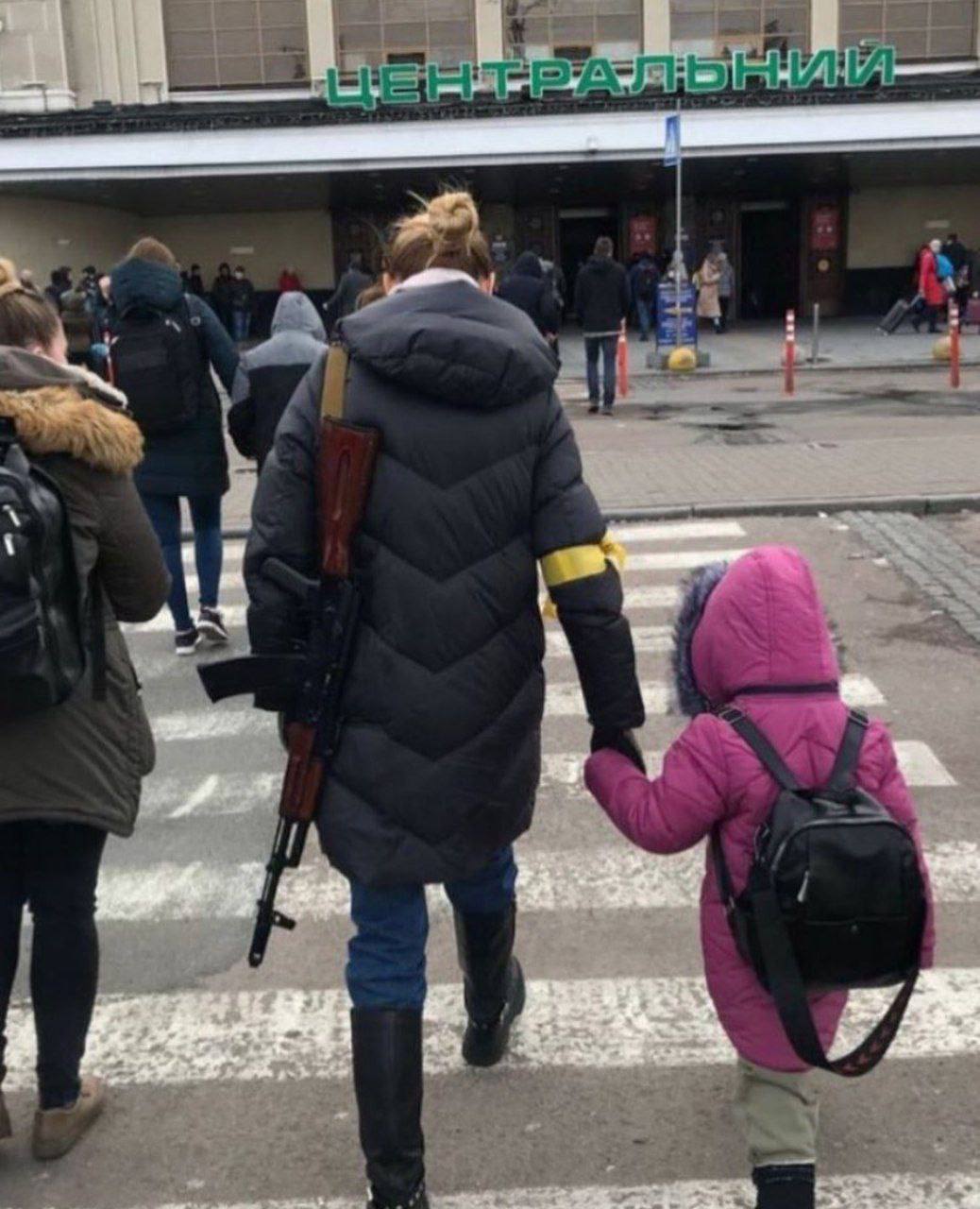 It is very inspiring that Ukraine and its people are getting so much support and help now. Ukrainian people are being given a huge credit line despite all our sins; we will have to cleanse our souls and repay it soon.

This military campaign is not the first war crime of Russia. There is a cautious hope that it will be the last one. It’s worth to inform yourself on what is happening, and what has been happening for years before.

All of the events, on all scales, have only one common thing: terror. Have I missed anything?

What’s been happening for the last years and decades?

It’s not a sudden outbreak of alien infernal forces from deep space. This has been brewing for decades. Many just didn’t register the changes, or didn’t respond to them.

For “protection of Russian-speaking people”. Up to now Moldova doesn’t control Transnistria, a big and important part of its internationally recognized territory. It’s not just loss of legitimate control. It’s a forced establishment of a breeding ground for crime, and a persistent threat of military force capable of upending the state any hour. It’s a huge open wound, and Russia keeps a bayonet in it. Everybody else in the world keeps minding their own business.

In 2014, Russia annexed two parts of Ukraine: Crimea and Donbas.

2014 was the time of civil unrest in Ukraine due to illegitimate course change by the President Yanukovych: Revolution of Dignity. That course change was directly dictated by Russian pressure. Pro-russian Yanukovych asked Russia for assistance, and that, and “protection of Russian-speaking people” was the pretext for the military intervention. Now recall Moldova, 1992. The history doesn’t repeat but it definitely rhymes.

Crimea and Donbas started to smell like real troubles for the EU and the USA, but not for everybody. This crisis has resulted in “deep concerns” abound, but also in sanctions. Sanctions are very nice support indeed, but note that it was mostly govermnents doing the work, there was no apparent international social upheaval or stress over this. I don’t know of any big transnational corporations which stopped doing business with Russia on their own accord just because of Crimea and Donbas. Business as usual, unless our goverment forbids to do business with those blacklisted filthy rich russians! Plenty of trade on the restricted goods kept happening through Belarus as a proxy. The golden age of Belarussian delicacies followed.

Entire world, on all scales - global official bodies, international unions, sovereign countries, businesses, organizations and individuals - are now being challenged by this aggression. Can they do something? Are they free to do anything? Do they even want to do anything? Will they learn or at least remember anything when it’s finished?

When it all finishes, we all will look at each other and see what others have done, and make conclusions. And based on these conclusions, we will do something else.

So what everyone’s doing?

These are establishing a formal and political consensus on the invasion. Some are useful enough to be even considering some actions.

The invasion has been condemned by the UN, NATO, OECD, Council of Europe and plenty of others. It’s particularly interesting to watch what NATO is doing, but I am not able to summarise it currently.

Now, I love the Internet as much as the next software geek. In the Internet, you can build your own virtual places, which is fun. What’s important is that even with toy virtual places you can learn how to peer with others and make viable communities and pretty soon it’s a political process all the way down. You learn by doing and by seeing, and there is a lot happening in the open to see and learn from.

So what are the highest Internet priests doing?

The Executive Board of the RIPE NCC believes that the means to communicate should not be affected by domestic political disputes, international conflicts or war.

It is crucial that the RIPE NCC remains neutral and does not take positions with regard to … war.

ICANN had been asked to contribute to shutting down the Russian access to Internet (copy). ICANN has refused.

I see where they’re coming from. But I don’t think these are the best stances.

Any ISP or webmaster is expected to promptly respond to abuse complaints. This is the way because if you don’t shut down abuse, you destroy the value of your service and the wider network you’re a part of. If you don’t shut down abuse, your peers and users sever their ties with you, and now you’re in isolation, and what you control is no longer a network resource. So on all levels, the best network service custodians are vigilant against abuse. It’s a job demanding the best of human judgement to resolve abuse complaints. And for many service operators, it’s a day-to-day job. I find it ironic how the Internet custodians so close to its precious root are not willing (or capable) to even explicitly engage with the reasons of the underlying concerns or the complaints laid out. “The means to communicate should not be affected by war”? What do you think is happening as the civilians are being shelled and bombed in their homes? People are deliberately being disintegrated into gory mess in a bid to scare all the nations into bowing to the dictator. But good that we have our ducks in a row with the IP blocks and TLDs allocated, because as we know, access to information is good. Completely delusonal worldview.

I see what you’re doing here, gentlemen. You’re playing with computers and you want to keep playing. You’re not serving humanity.

The Internet thus governed is not useful and not long term viable.

To claim “we want everybody to stay online together” is not sensible, it just allows the abuse to continue, and all sufficiently concerned participants will leave such network. It’s not very sensible to appeal to the argument that “there are different people inside Russia and shutting down RuNet is indiscriminate”, either. If you can’t discriminate between abusers and legitimate users (they appear as the same source), then in the end you still either allow abuse or allow collateral damage from abuse prevention. This works in practice: the innocent neighbours of the abuser who find themselves punished together with the abuser take their action then. If the innocent people don’t matter in resolving the matter, maintaining the same high quality of service to them is an intractable problem. Many russians point out expressly that they don’t matter in their country’s political process. This is not a valid excuse in Ukrainians’ book for a long time now. If you are not free enough to sever your ties with the abuser, don’t expect a good network with the abuse victims.

I am not arguing that ICANN and RIPE have to change their decisions. I am arguing that they are rendering themselves and the Internet less relevant for the future. I am arguing that we all should make our own conclusions and inform our actions. They don’t block RuNet today for everyone, but the benefit of freedom is that every organization and even individuals can block RuNet on their own if they so wish. Let me show you how.

Big businesses which want to do well in the world of tomorrow and are smart enough to deserve it, are getting on these lists:

It’s not always happening exclusively due to their own love to Ukraine or touchy hearts. The social pressure from partners, customers, employees and the general public makes it imperative for every large business to declare their position.

Does a company stand for the principles of free international relations, supporting the world which made these businesses viable in the first place? If it does, then it’s time to support these principles and the price to pay is losing some business. Material humanitarian support of Ukraine is abound, too, and highly appreciated, but the first step is stopping doing business with Russia.

Or is a company ultimately dependent upon their business with Russia? Then this company goes together with russian warships to fuck itself.

And if a company can’t make up its mind and tries to appease everyone… The world will remember its indecision.

Great to see a lot of organizations clearly responding to the situation and actually doing what they’re best at.

But there are a lot of organizations which raise a question: what would you say you do here?

The funny thing is that an organization may be big, full of the most capable, honest and ethical people, but on the outside it may look and act spineless.

For example, what does the UK LibDem party has to say on their website? “The UK Government must commit…”. What are you guys doing right now? How are you mobilising your funds, supporters, volunteers, influential representatives country-wide? I don’t see anything. A webpage with a hardline call to action (for somebody else) may be OK for an individual, but not for a UK parliament fraction.

Meanwhile, even small orgs and informal teams take action. These small actions do matter, resulting in the words of support to Ukraine flowing from everywhere, overtaking even the russian firehose of falsehood.

For example, Dark Reader web browser extension developers have made their message prominent on every browser having it installed.

A lot of people in Ukraine are risking their life to defend and build the better world they envision - with arms or by doing their civic jobs in public interest. My blessings to them.

A lot of people in neighbouring countries, notably Poland, are showing extreme generosity, providing all the needs of hundreds of thousands of Ukrainian refugees. They get free entry across the country border, free food, clothes, shelter and transport. They are provided with personal support and guidance - from all kind people and particularly from designated volunteer “buddies”.

Some people in Russia are expressly protesting. Good for them and maybe even for the future of Russia - they may be the saving grace of it. Everybody knows it’s risky, so “it’s risky” is not an excuse to not do it - it’s the reason to do it today rather than tomorrow when the risks will be even higher. We know that Russian state terror machine is brutaly vengeful to the protestors. Creating too many targets to punish is how you DDoS it. And in the end, if Russians don’t muster enough agency to show that they matter, they shouldn’t expect the outside world to treat them as if they matter.

The international consensus has solidified around the support of Ukraine so strongly that the “neutrality” stances are hardly distinguishable from the accomplices. If you stay where you were before, if you don’t say anything new today - you stay in bad company. Escape it.

Delegating the responsibility for dealing with this crisis hasn’t helped. It’s everyone’s concern.

Whoever you are: do something now, or you won’t matter tomorrow. And then, remember everything.